Discoveries in southeastern Yukon of the Tom zinc-lead-silver deposit in 1951 and the Faro and Jason deposits in 1965 and 1975, respectively, demonstrated the potential for large tonnage, sediment hosted stratabound sulphide (SEDEX Pb-Zn-Ag deposits) and barite deposits similar to the Meggen and Rammelsberg, to occur in the regionally extensive Paleozoic basinal facies rocks of the Selwyn Basin. The discoveries prompted a number of organizations to embark upon regional geological and geochemical exploration programs during the 1960’s and 1970’s within the southeastern extension of this basin known at the Kechika Trough 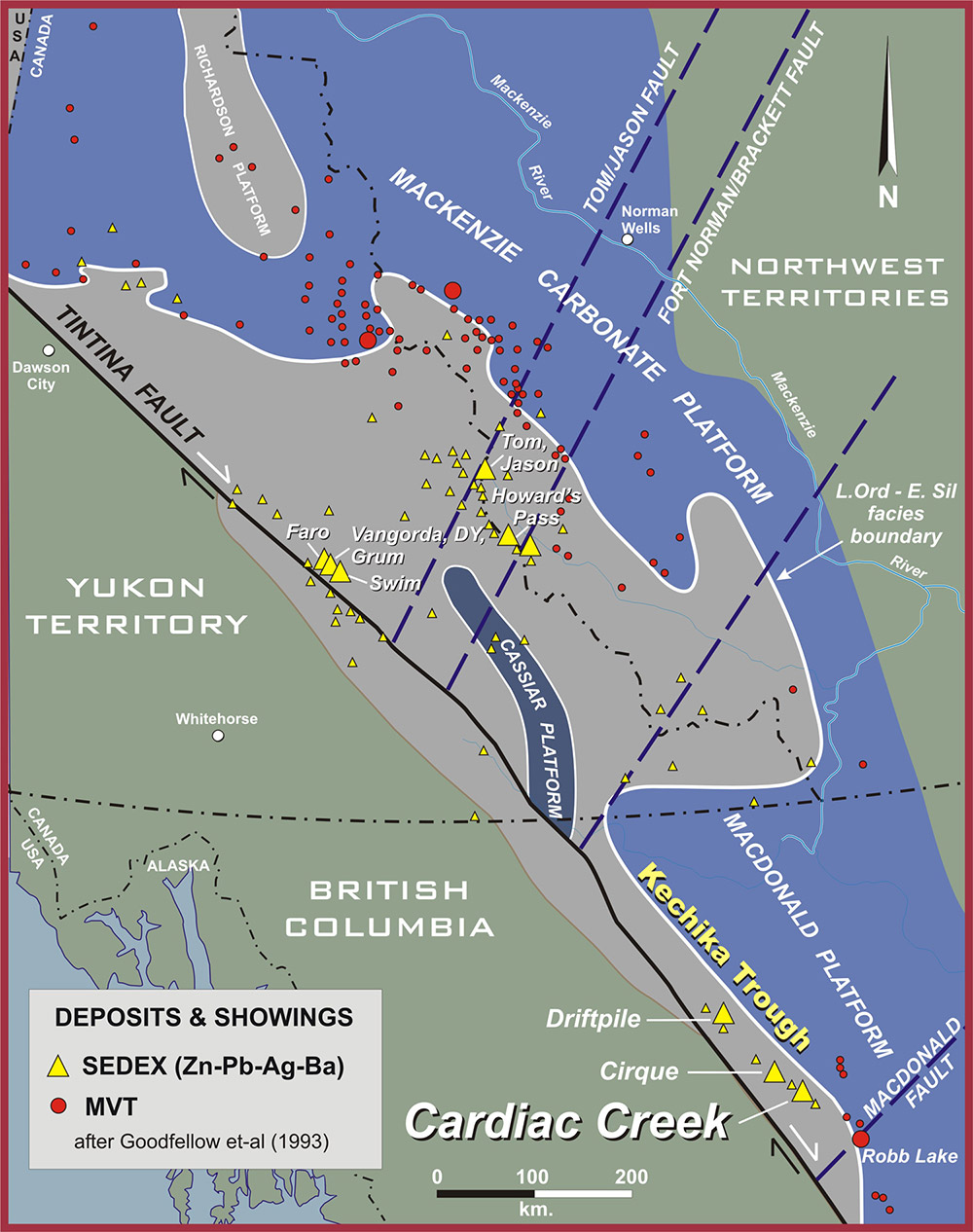 located northeastern British Columbia. This initial phase of exploration resulted in the discovery of numerous mineral occurrences of this type in the Kechika Trough.

By 1972, bedded barite-sulphide occurrences in late Devonian “black clastics” of the Gunsteel Formation near Driftpile Creek, in the central part of the Kechika Trough, had been identified. Subsequent work at Driftpile Creek defined a small but high-grade historical geological resource of 2.44 million tonnes grading 11.9% Zn and 3.1% Pb at an 8% Zn cut-off(1). However, the most significant discovery occurred in 1977 when a Cyprus Anvil/Hudson's Bay Oil and Gas Ltd. joint venture discovered the stratiform Cirque deposit in similar strata located approximately 80 kilometres to the southeast, in the Paul River area. Several other properties were drilled at various times in the 1970’s, including: Pie, Fluke, Elf and Mt. Alcock, all of which are host to either bedded barite and massive sulphide occurrences hosted by the Gunsteel Formation.

In December 1992, Curragh Resources, which had previously acquired Cirque, was issued a Mine Development Certificate (approval for construction) by the BC government for a mine/mill complex with a daily milling rate of 3,500 tonnes. The company estimated that the project would produce about 250,000 tonnes of zinc and lead sulphide concentrates yearly. Historical mineable reserves at the Cirque Main deposit were estimated at 24.7 million tonnes grading 8.5% Zn, 2.3% Pb and 50.8g/t Ag(2). Development of Cirque did not proceed, and the property was subsequently acquired by Teck Resources (50%) and Korea Zinc Company (50%) under a joint venture.

The Dog claims were initially staked in 1978 by Rio-Canex who undertook a large geochemical soil sampling program but did not carry out any drilling. Rio-Canex allowed the claims to lapse in 1982. The property was re-staked by Ecstall Mining Corporation in 1989 and renamed as the Akie claims. Ecstall optioned the claims to Inmet Mining in 1992. Inmet conducted detailed geological mapping, geochemical surveys and geophysics. The discovery of the Cardiac Creek showing was made in 1994 and subsequent sampling demonstrated the high-grade nature of the mineralisation (18.8% Zn+Pb over 40 centimetres). Follow-up drilling from 1994 to 1996 led to a historical non-compliant resource estimate of 12 million tonnes grading 8.6% Zn, 1.5% Pb, and 17.1 g/t Ag(3). 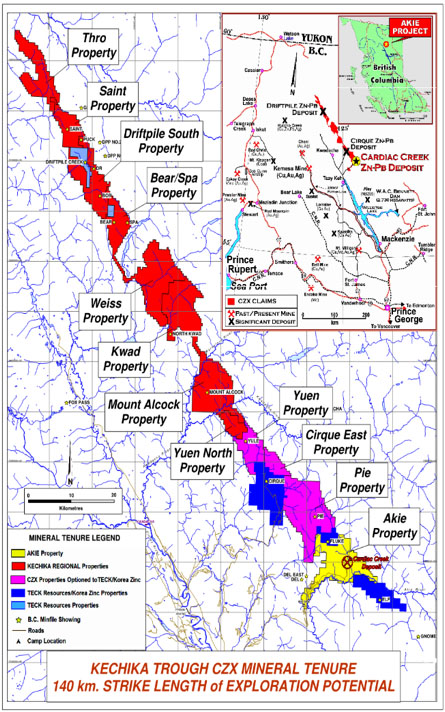 The Company’s extensive tenure package is located in northeastern British Columbia in the geological district known as the Kechika trough. The Company has strategically positioned itself as the dominant tenure holder within the Kechika Trough accruing 230 contiguous claims totalling an area of 798km2 and extending over a strike length of approximately 140 kilometres that cover the prospective Gunsteel Formation shales. The Company has sub-divided this large tenure package into two main projects; the Akie Project which is host to the Cardiac Creek deposit, and the Kechika Regional Project which consists of eleven individual property blocks.

Akie Project: is comprised solely of the Akie property consisting of 46 mineral claims covering an area of 116km2. The Company controls a 100% interest in the project.

The above, quoted historical mineral resource estimates were prepared before the introduction of National Instrument 43-101 - Standards of Disclosure for Mineral Projects ("NI 43-101"). The key assumptions, parameters and methods used to calculate the historical resources are not known and the Company is not treating the historical estimates as current mineral resources or mineral reserves. These estimates are reported herein to demonstrate the exploration potential of the Kechika Trough but should not be construed to reflect a calculated resource (inferred, indicated or measured) under the current standard required of NI 43-101. The potential quantities and grades reported above are conceptual in nature and there has been insufficient work to date to define a NI 43-101 compliant resource. The economic viability of the historical resources is not demonstrated, furthermore, it is uncertain if additional exploration will result in discovery of an economic mineral resource on those properties.

Ken MacDonald P.Geo., Vice President of Exploration, is the designated Qualified Person as defined by National Instrument 43-101 and is responsible for the technical information contained herein.