2016 Cordilleran Round Up Presentation

The Company recently gave a technical talk at the 2016 Cordilleran Round Up. 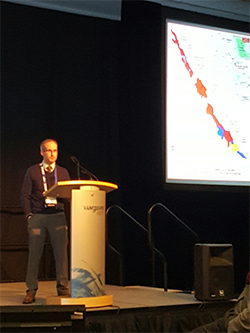 The Cardiac Creek deposit, Akie property, is located in the Akie River Valley of northeastern British Columbia, approximately 260 kilometres NNW from the town of Mackenzie. The property is situated within the Kechika Trough, the southeast extension of the prolific Selwyn Basin. The sequence of fine‐grained clastics from the late Devonian Earn Group are considered the prospective rocks in the Kechika Trough. Specifically, all of the deposits (Cardiac Creek, Cirque) and occurrences (Mt. Alcock, Elf) are hosted by the carbonaceous, siliceous shales of the Gunsteel formation, the basal unit of the Earn Group.

Stratigraphically, the mineralisation is positioned just above the base of the Gunsteel formation and is underlain by debris flows of the Paul River formation and siltstones of the Road River Group. The mineralisation is located at a transition point between the Kwadacha Reef to the east and deep‐water clastics to the west. The deposit, marked along its upper contact by a distinctive quartz‐carbonate vein zone, appears to be bifurcated into two distinct horizons, the Cardiac Creek Zone and the Footwall Zone. The mineralisation is characterised by two distinct facies: Proximal facies, defined by thickly bedded fine‐grained dull brown pyrite with minor sphalerite banding, and the Cardiac Creek Zone, defined by thick bands of steel grey sphalerite and galena interbanded with pyrite, barite and shale. High‐grade Zn and Pb is associated with a quartz‐barite mottled texture within the sphalerite bands.

Since 2011, the company has focused on expanding the known limits of mineralisation as well as defining the high‐grade core of the deposit which remains open primarily down‐dip and along strike to the northwest. Aspects such as: element ratios, localized alteration, sulphide breccias, the presence of massive sulphide lenses and, surprisingly, concretions all correlate with the high‐grade core. Recently, airborne geophysics (VTEM and Gravity) have been used to define lithological units, structure and provide a deposit signature to assist exploration on the property and regionally.

Drilling since 2010 has also intersected several thin intervals of mineralisation associated with Paul River formation rocks that are enriched in a suite of elements including Ni, Zn, Pb, Mo, U, V. This represents a new style of mineralisation in the Kechika Trough and is similar in character to the Nick deposit, Yukon.